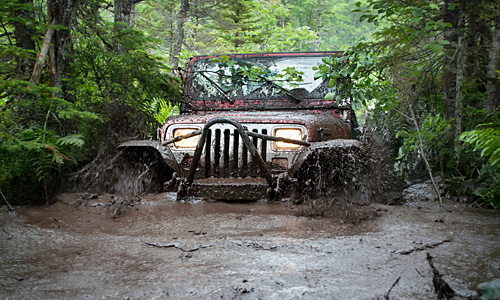 Jeep's early history reads like a legend. Created in response to the US military's need for a lightweight, tough, and nimble vehicle, the original Jeep helped defeat US Axis powers; Jeep towed antitank weapons, mounted anti-infantry machine guns, and served as battlefield ambulances. The consummate off-road vehicle, Jeep could ford rivers and traverse lakes. Jeep "came ashore on D-Day, and it carried the Allies all the way to Berlin and onto Guadalcanal and Iwo Jima and, eventually onto the mainland shores of a defeated Japan," according to an Autoweek 75-year brand history. The US military left Jeep vehicles in place as they returned home, thereby generating worldwide brand recognition.

In the ensuing decades, Jeep has seen a weak corporate owner and the failure of another. Today the brand is owned by Fiat Chrysler Automobiles. Its lineup includes Jeep Renegade (the least-expensive model), Grand Cherokee SRT (the sportiest), Grand Cherokee (the most expensive), and Wrangler—the most popular, reports Jeep's Buyer's Guide. Wrangler sales have grown from almost 81,000 vehicles in 1997 to roughly 191,000 vehicles in 2017. Jeep sales in the first five months of 2018 (more than 110,000 vehicles) are outpacing sales during the first five months of 2015—the landmark year for total units sold (almost 203,000 vehicles), according to carsalesbase.com.

Jeep ownership is a good example of why individual consumer groups exhibit the same behavior for various reasons. For example, Thinkers may connect with the brand's history and longevity of use, whereas Achievers may appreciate that Jeep doesn't look like their parents' sport-utility vehicle, and Innovators are likely attracted to Jeep's authenticity and true off-road capabilities.

Although expensive and more luxurious Jeep models will likely remain the mainstay of sales to Thinkers and some Achievers, Wrangler sales will depend on successfully capturing the imaginations of Experiencers, who desire a real experience into unknown territories, which Wrangler can provide.

To learn more about the VALS types and the most appropriate VALS target for your business, contact us.