What does it say about the United States that the month of March is designated to acknowledge contributions made by more than one-half of our nation's population? March is a reminder that, as a country, we have a lot of work to do to ensure that women benefit equally in the American way of life. In 2021, the reminder is especially poignant.

This past year American women have fared worse than women in other rich countries according to The Economist. "The US has no mandated paid parental leave, no universal low-cost child care, and no mandatory sick leave... mothers are our safety net" reports sociologist Jessica Calarco in the 23 February Ellevest newsletter. Women in the service sector are among the first to have lost jobs when the pandemic hit one year ago; many have no support or financial safety net. Many women able to work remotely are beleaguered with increased work responsibilities; mothers are overwhelmed with the addition of home schooling. Some women have little alternative but to step back or step away from paid work. For example, Fast Company reports that "Nearly 30% of C-suite or VP-level women reported that the pandemic had altered the course of their career. About 25% said they would leave their posts sooner than expected due to their employer's response to the pandemic."

Throughout most of the 1990s women's participation in the workforce advanced as the economy expanded. The number of working women increased in the early 2000s with a slight dip as a result of the Dot.com Bubble. Even through the Great Recession, the numbers of working women continued to grow; as a consequence of receiving lower pay than men, many women retained their jobs as many men lost theirs. As the economy recovered, the number of women working continued on an upward trajectory. And then, Covid‑19! The 2.5 million women have left the workforce since the beginning of the pandemic (in comparison with 1.8 million men) constitute a national emergency. "Our economy cannot fully recover unless women can participate fully," Vice President Kamala Harris told the New York Times in February." CBS News pegs the number at closer to 3 million women who have left the workforce; some experts agree that the "crisis stems from outdated, but persistent, views of women in the workforce." 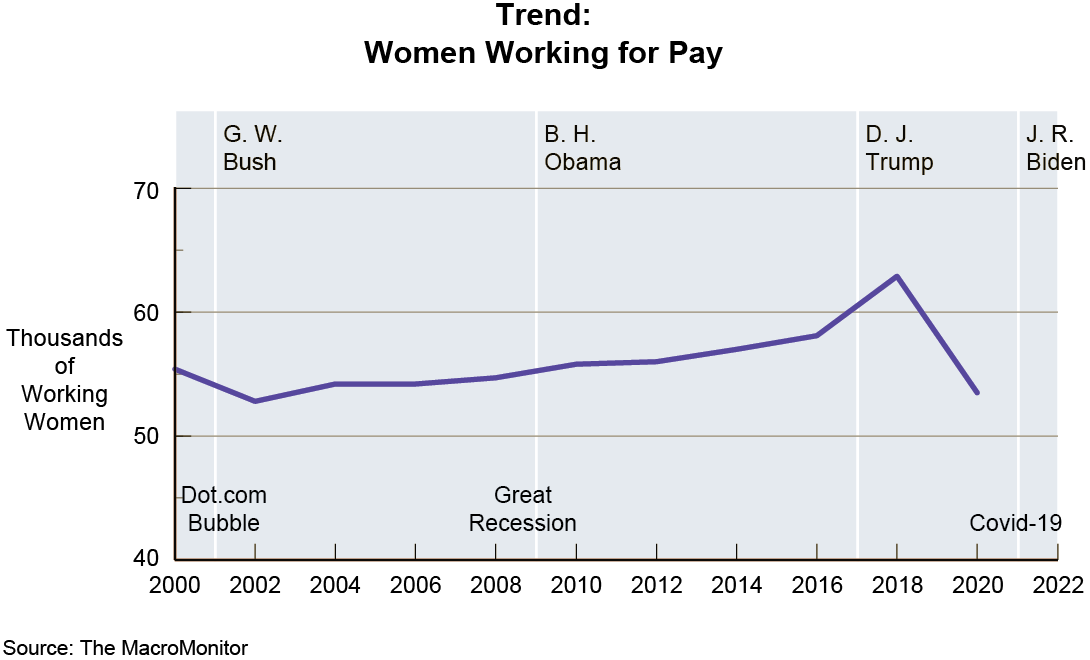 Progress has been made in breaking the glass ceiling. Examples of ground-breaking women are becoming more plentiful (learn more—request CFD's Women's Timeline). One recent example is Jane Fraser's appointment as CEO of Citigroup, a major US bank. However, for every Jane, there are millions of women at the other end of the pay scale. Pay inequality is an incessant problem. White women earn roughly $0.81 on the dollar in comparison with White men (a decrease of $0.01 since 2015); Black women earn $0.76, and Latinas earn $0.55 in comparison with White men. Three gaps affect women—the opportunity gap, the pay gap, and the wealth gap—Google them; the number of search results is staggering. (Some) men try to convince (some) women that they're not that good with money because they're not that good with math, because they spend frivolously, or because they're risk-averse. Not true! Most women don't need a course in financial literacy. Most women simply need more money. The average amount of money women have and keep in comparison to men is only 32 cents on the dollar (Ellevest).

Let's be honest. Our society was founded by wealthy, white men, and is still controlled by wealthy, white men. Established policies and practices paternally counsel women to 'step up,' be satisfied with pay scaled to be a second income, and to be patient. Oh yes, don't forget to 'lean in.' In America, the world for women isn't working out the way men leaders envision. At the current rate of women's progress, it will take 100 (pre-pandemic) years for women to catch up with men in the C‑suite.

Women are more interested in being in control of their lives than in having power over others. Your challenge is to figure out the ways and means to give women control.

The MacroMonitor provides facts to inform your actions as you adjust company policies and product and service offers to be more inclusive of and to empower women. Recruiting, supporting, and promoting women will help your business directly. To grow your women's business your organization needs solutions developed for women by women.

For more information, or to have a conversation, please be in touch. We're easy to reach.