A limited body of research aims to give people "eagle eyes" and hands-free magnification for close-up work. 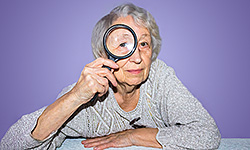 During May 2019, Stanford University researchers demonstrated fluid-filled lenses that automatically adjust focus. An eye tracker and a depth camera help a fluidic control system select a focal point. Autofocals have potential to greatly improve abilities to correct typical age-related vision impairments. But the technology might also improve vision in people who do not need corrective lenses or eye surgery, as can occur when people with good eyesight use magnifying spectacles for work and hobbies.

During recent years, a US Defense Advanced Research Projects Agency– (DARPA-) funded team built a system that changes magnification when a user winks, using electronic eyeglasses in concert with advanced (passive) contact lenses. A limited clinical trial demonstrated that the lenses are thin enough to stay in place when users blink. Tests with a physical model of the human eye equipped with mechanical eyelids yielded magnifications of 1x and 2.8x on demand. In 2015, a team member told the Guardian that DARPA was "really interested in supervision, but the reality is more tame than that." Nevertheless, a June 2019 PhD thesis from one of the people on the team—University of California, San Diego, researcher Glenn Schuster—reports a number of follow-up developments. Dr. Schuster acknowledges the possibilities for vision enhancement, not only vision correction and remedies for low vision, and he noted that the prototype design has a "zero-diopter prescription," which means it is suitable for healthy eyes, not eyes that require correction.

Unlike most other proposed head-mounted devices, autofocal eyeglasses require no new display technologies. They could emerge within ten years and eventually become common personal items. For people with healthy eyes, the spectacles could at a minimum enable hands-free switching between ordinary vision and magnified views for close-up work.

Blink-controlled systems, such as those that DARPA-funded researchers developed, might also be available within ten years, but initial versions could be costly, somewhat bulky, and otherwise unlike existing contact lenses. Nevertheless, various kinds of workers and professionals might make advantageous uses of the technology. Extended use of existing prototypes would endanger eyes by depriving them of oxygen. But Dr. Schuster notes that ongoing developments seek to integrate a cavity in the lens that exposes the eye to air.

By a wide margin, most research about devices for improving vision aims toward correction of impairments, and of the remainder, most aim toward remedies for focusing errors that arise when near-eye displays render virtual or augmented realities. Wearable electronic technologies that adapt to various people's visual acuities might also aid use of head-mounted displays for extended periods without eye fatigue or simulator sickness.

Developments toward systems that enhance vision might yield large rewards eventually, but the efforts involve high risks. During recent years, Canada-based start-up Ocumetics has labored to produce smart intraocular implants that can both correct and enhance vision. In April 2019, the company reported it had redesigned its implants to be more suitable for mass production, but the redesign seems to introduce multiyear delays in schedules for clinical trials and regulatory approvals.

For unknown reasons, nearsightedness is on the upswing. About a third of the world's population has impaired distance vision—up from less than a quarter 20 years ago. If current trends continue, half the world will be nearsighted in 2050. Demand for technological remedies will be enormous.