Television developers are working on next-generation specifications that will have impacts up and down the visual-media value chain. 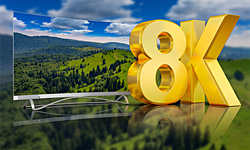 Several television manufacturers have developed 8K televisions—that is, televisions with approximately 8,000 pixels along the horizontal (and a total pixel count of about four times the number of pixels in a 4K television). However, these televisions have yet to become a significant factor in the television market—in part because of high prices and a lack of native 8K content.

In late August 2019, an industry group—the 8K Association—released its specification for what should constitute an 8K television. The performance specification includes a resolution of 7,680 by 4,320 pixels; frame rates of 24, 30, and 60 frames per second; and a peak luminance requirement of at least 600 nits.

The 8K Association includes Samsung Display, Panasonic, and Intel. One notable absence from the group, at least at present, is LG Display (the world's leading manufacturer of large-format organic light-emitting-diode displays). Nevertheless, the group does contain some major players, and its specifications are likely to have a strong shaping effect on various companies' approach to 8K televisions and display panels in the coming years.

Despite ongoing concerns about whether ever-increasing resolution produces a noticeable improvement in the viewing experience, television manufacturers seem bent on pursuing 8K as the next-step upgrade from 4K resolution. Consequently, having a clearly laid-out road map of what 8K will mean is important, and having a laid-out performance specification at what is still a relatively early stage in 8K development is a clear benefit to both manufacturers and consumers. Manufacturers now have a clear target for their products' performance, and consumers are less likely to face a confusing patchwork of self-defined "8K" display technologies.

Notably, the performance specification is not a radical departure from current standards. The pixel resolution corresponds to a predictable doubling of the 4K ultra-high-definition standard of 3,840 by 2,160 pixels; likewise the format's frame rates are relatively standard for film and television production. The luminance requirement is also relatively modest and is in line with current-generation high-dynamic-range television sets.

Like 4K before it, 8K marks another opportunity for the bigger players in the display industry to differentiate themselves with a new generation of technologically demanding products that smaller manufacturers will struggle to match for at least the medium term.

Quadrupling the number of pixels in a display has a knock-on impact for every company active in putting images onto a screen—from television and film producers through hardware developers and manufacturers and companies offering ever-larger data-storage solutions to respond to increasingly chunky image and video files. The likelihood of all these components' progressing at the same rate is slim, and industry players will be watching to determine where bottlenecks may develop in 8K's rollout.