Electric Vehicles: Who Buys Them? September 2018

At the end of 2017, the cumulative global number of electric vehicles was an estimated 3 million. The preponderance of fossil-fuel cars and trucks raises the question, What kinds of people are breaking with tradition to buy electric vehicles? The majority of new car buyers presently are not consumer targets for EVs. Learn why.

Who Are the Main New-Vehicle Buyers in the United States?

For a clearer picture of the kind of people who are buying plug-in electrics in the United States, Strategic Business Insights (SBI) uses VALS™, a consumer framework that segments consumers by their contrasting mind-sets as they relate to purchase behavior. For context, US national survey data from the VALS/GfK MRI national consumer survey show that about 10% of US adults (people 18 years old or older) bought or leased new cars in the past one to two years. Figure 1 shows that nearly a quarter of new-vehicle buyers have a Thinkers mind-set. Thinkers is an older, information-seeking group that enjoys reading, research, and historical perspective. The group is financially established; many members are retired. Thinkers prioritize functionality over style. Achievers, representing another 21% of new-vehicle buyers—and in contrast to Thinkers—are not avid readers and value product styling as a reflection of their self-image. They are goal oriented, energetic, and family focused. Most work full-time. For Achievers, global concerns are often secondary. Thinkers and Achievers both have mean household incomes of about $100,000, which makes new-vehicle purchases feasible for them. 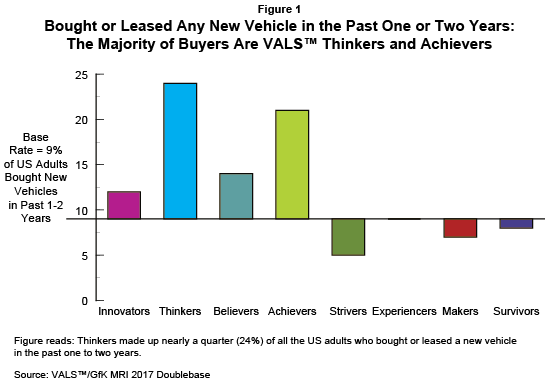 Unfortunately for the EV market, these two consumer groups—Thinkers and Achievers, the groups that buy the most new vehicles each year—do not, for the most part, buy EVs. In fact, few of them even remotely consider buying them. Some of the reason is the astonishing lack of public knowledge (positive or negative) about EVs. The consumer psychology of Thinkers and Achievers also accounts for some of their lack of consideration. Among Thinkers and Achievers who might fleetingly consider EVs, range limitations and concerns about charge time and charging infrastructure remain high on the list of barriers. Some people have a vague notion that EVs are "good for the environment" but have a hard time explaining why. Most car owners don't even realize that tailpipe pollution from gas-fuel vehicles is a problem.

Who Are Today's Main EV Buyers in the United States?

So who does buy EVs? Because the number of EV owners in the United States is still such a small proportion of vehicle owners, survey data about them are scarce. In this absence, SBI uses its decades of experience in studying consumers to hypothesize about who the likely EV buyers are.

US EV owners are most likely VALS Innovators—successful, involved, forward-looking consumers who try to understand and make sense of the world's complexities. Innovators are the most highly educated VALS consumers and have the highest mean household incomes. Most work full-time in professional careers. As the name suggests, Innovators appreciate new innovative products and ways of doing things and are often early adopters of new technology products and services. National survey data show that Innovators were the early adopters of the Toyota Prius when hybrids were first introduced. They are the most likely consumers to have purchased solar panels for their homes in the past 12 months. And they are the most likely people to believe that climate change is real and human caused.

Despite Innovators' sympathetic attitudes toward climate, the desire to do their part in reducing CO2 (carbon dioxide) emissions and other tailpipe pollutants by buying an EV is not the likely key motivating factor in the actual purchase decision for more than a small fraction of Innovators buyers. Environmental concerns deserve recognition for raising Innovators' interest in the electric category, but those concerns seem not to be a strong enough motivation on their own to persuade even Innovators to part with their money. Range anxiety continues to be a persistent EV barrier, even for Innovators. Almost no one seems to understand intuitively that with an electric car, one wakes up each morning with what is essentially a freshly fueled (charged) vehicle without ever, ever having to go to the gas station. Somehow, the habit of watching the gas needle move toward empty and filling up en route is deeply ingrained with a sense of security in Americans' thinking. Innovators will likely overcome range anxiety more easily than will other consumer groups, given their natural future-focused willingness to try new ideas and, of course, the ever increasing number of EVs with larger and larger ranges.

Two factors powerfully activate the Innovators' purchase decision: having the perfect use case for owning an electric vehicle—such as having a short commute, free charging at work, easy overnight charging at home, and at least one traditional gas-fueled vehicle as a backup—and determining that the long-term value proposition actually is positive for them, on the basis of a thoughtful financial analysis of EV benefits (inclusive of both BEV and PHEV) over the long haul (for example, electricity costs are less than gas costs on a per-mile basis, tax credits are available, access to toll roads is free, and access is available to high-occupancy-vehicle [HOV] lanes. BEVs have an additional benefit: BEV maintenance costs are lower in the long term because of fewer moving parts and having almost no fluids to change. PHEVs still use gasoline in combination with electricity so do not have this benefit.)

Who Isn't Buying BEVs Today and Why Not?

Although "the perfect use case" may motivate a small proportion of Thinkers and Achievers to make a BEV purchase, few Thinkers and Achievers buyers exist today. Some Thinkers express interest in the electric-vehicle phenomenon and at the same time reject purchasing because they are quite comfortable with the traditional gas-fuel cars they normally buy and are put off by BEVs' relatively high (or in Tesla's case, until the recent release of Tesla Model 3, totally high) up-front costs. Thinkers often lag in adoption of new technology because they are satisfied with what they have and because they are savvy enough to know that prices will eventually fall and technology "bugs" will eventually clear up if they patiently wait. SBI survey work shows that Thinkers are quite concerned about climate change, believing that it is real, happening, and human caused, but this environmental awareness is evidently not strong enough to motivate an electric-vehicle purchase. Automobile manufacturers selling electrics need to identify and promote other benefits that motivate Thinkers.

Achievers may be attracted to the free toll-road and HOV-lane access that BEVs enjoy, but they typically want cars that are big enough and safe enough for their families, as well as nice enough to project a respectable image to others. For most Achievers, the early Nissan Leaf exterior styling was too strange, the extended-range Chevy Volt interior too cheap, and the Tesla S too expensive. Achievers like to be associated with what is absolutely current, but they want not to be associated with products that are odd, inconvenient, or potentially stupid. The possibility that they could run out of charge with a car full of children leaves most Achievers wondering why anyone would take the chance. It is true that Achievers as a group drive more miles per year on average than other groups do, but Achievers are unlikely to overcome range anxiety until no reason for range anxiety exists—that is, until charging stations and home-charging outlets are as common as gas stations are today. Nothing says that Achievers will never adopt BEVS in large numbers, but they will likely do so after the range is more than 200 miles per charge, exterior and interior styling is more Teslaesque, and lots of Achievers' associates—which means their bosses at work or respectable neighbors with nice houses—own them and talk openly about their benefits. Interestingly, the average number of miles per day that most Americans drive—between 30 and 40 miles—is far smaller than 100+ mile equivalent that many electric vehicles now have.

Experiencers, who make up another US consumer group, are excited about and predisposed to all kinds of new products and services—especially those that use new technology—so it is no surprise that today many of them talk enthusiastically about BEVs. Highly social, impulsive, and irreverent, Experiencers are also young, relatively new to the workplace, and consequently with limited spending power—too limited in most cases to afford a new BEV. Many Experiencers are also constrained by apartment living with no place to plug in.

Who Is Likely to Buy BEVs?

Consumer markets are rarely static. Products that appeal to early-adopter consumers—such as VALS Innovators—can gain the attention and favor of other consumer groups if the benefits are compelling to other kinds of people as time goes on. Everett Rogers—social scientist and former Stanford University professor—popularized the consumer diffusion process as Figure 2 shows. 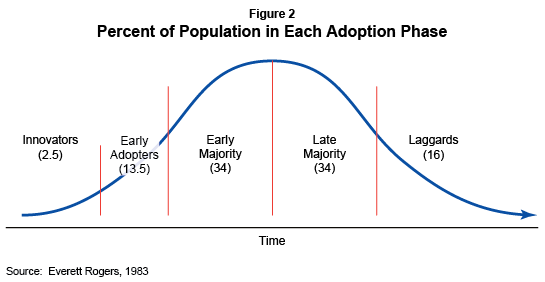 Often, diffusion occurs naturally. Sometimes, product marketers influence this diffusion process, speeding it up or changing its path. Because Thinkers and Achievers make up the largest proportion of new-car buyers, it's logical that automakers might want to try to speed BEV diffusion to them by accentuating benefits that are particularly compelling to each group through advertising or other communication campaigns. Achievers, with the perfect use case (which means their work commute involves roads with HOV lanes, their commute is easily within the BEV's range, charging is easy for them, and they have a second fossil-fuel car), might start at least to consider electric benefits. A benefit largely unknown to Achievers, Thinkers, and even Innovators is BEVs' almost instant torque. That immediate sense of power might be an especially meaningful benefit to Achievers, Innovators, and Experiencers (although again, few Experiencers have the money to spend on cars in today's electric price range). Most consumers whom SBI has talked to via focus groups and interviews mistakenly think BEVs are slow. Thinkers might need a deeper understanding of BEVs' long-term financial benefits, including electricity-versus-gasoline costs and gas-versus-battery-vehicle maintenance costs.

For information about how to work with SBI's VALS team on a project customized to meet your business need for fresh consumer insights, please contact us.

Learn More about the Future of Vehicles from Other SBI Services

Clients receive more context and detail, trends, implications, a greater variety of topics, related research and articles, and more. Contact us today to learn more about our services!

SBI works with clients to identify new business opportunities and map strategies for success. Combining syndicated research with custom consulting services, SBI explores solutions to targeted problems from three important perspectives: the technology developments that will determine commercial opportunities, the forces that will define the business environment, and the shifts in consumer demand that will shape the marketplace. With our help, leading organizations identify coming changes faster, separate hype from reality, and create strategy with a greater awareness of what the future may bring.

SBI is the former Business Intelligence division of SRI International that has worked with clients on opportunities and change since 1958. Headquartered in Silicon Valley—with staff around the globe—we work internationally across a wide range of government and commercial sectors, including electronics, health care, energy, and financial services. Contact us to discover what we can do for your organization.