Harvesting Energy from Rain May 2016

Solar cells are one of the main contenders in the renewable-energy industry but rely on the ability of solar rays to reach the photovoltaic cells. Recent research reveals a new "all-weather" solar-cell prototype that is capable of harvesting energy from rainwater in addition to solar energy, which could expand the cells' competitive position in the global market. 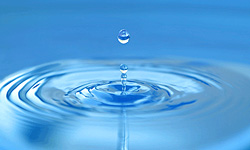 Research teams from the Ocean University of China and Yunnan Normal University developed a solar cell that is capable of generating electricity from both sunlight and rainfall. The solar cell prototypes are similar to conventional dye-sensitized solar cells but comprise an additional highly conductive graphene-oxide layer. Electrons flow freely in the graphene-enriched electrode and interact with the salt ions—such as sodium, calcium, and ammonium—present in rainwater, forming a pseudocapacitor. This solar cell is therefore capable of harvesting electricity from rainwater and from solar energy.

According to Qunwei Tang, materials scientist at Ocean University, "We would like to develop a solar cell that can be triggered by sun and rain.... Future solar cells may produce electricity in all weather." However, the researchers' laboratory tests revealed that the current energy-harvesting efficiency of the new solar-cell prototype is only 6.5%, in comparison with 22.5% for conventional photovoltaic cells.

Solar cells are becoming increasingly more efficient and affordable. Since 2008, demand for solar cells has been increasing, with the cost of producing photovoltaic cells on the industrial scale falling by 60% in 2015. One obvious primary drawback of conventional solar cells is that they require solar rays to produce electricity and generate only negligible levels of power during overcast days and overnight. Rainwater is particularly beneficial to solar cells by removing dirt from their surfaces. The rain also reduces the amount of sunlight reaching the photovoltaic cells, which would typically reduce the efficiency of the cells.

The researchers' new solar-cell technology could increase the energy input of the solar cell by adding an additional renewable-energy source in the form of rainfall. In addition, it could provide governments and private citizens—in particular, in countries with limited sunlight—incentive to increase their investments in solar-cell technologies. However, incorporating additional functionalities into the solar cells will result in higher production costs at the outset, which is not useful for an industry striving to compete with low-cost fossil fuels.

The renewable-energy industry relies heavily on innovative research and design of materials to increase the productivity of energy-harvesting technologies. In particular, nanomaterials with oxide and hydroxide structures play a key role in pseudocapacitor applications for energy storage.

Energy harvesting has the potential to be a major market for smart materials such as piezoelectric materials that generate energy from the impact of rainwater—which could compete or combine with this solar-cell technology. However, at least ten years will most likely pass before these technologies are capable of reaching the high efficiency and low manufacturing costs necessary for their successful commercial release.

Clients receive more context and detail, trends, implications, a greater variety of topics, related research and articles, and more. Contact us today to learn more about our services!

SBI works with clients to identify new business opportunities and map strategies for success. Combining syndicated research with custom consulting services, SBI explores solutions to targeted problems from three important perspectives: the technology developments that will determine commercial opportunities, the forces that will define the business environment, and the shifts in consumer demand that will shape the marketplace. With our help, leading organizations identify coming changes faster, separate hype from reality, and create strategy with a greater awareness of what the future may bring.

SBI is the former Business Intelligence division of SRI International that has worked with clients on opportunities and change since 1958. Headquartered in Silicon Valley—with staff around the globe—we work internationally across a wide range of government and commercial sectors, including electronics, health care, energy, and financial services. Contact us to discover what we can do for your organization.